The CRA7 fishery extends from the Waitaki River south along the Otago coastline to Long Point. 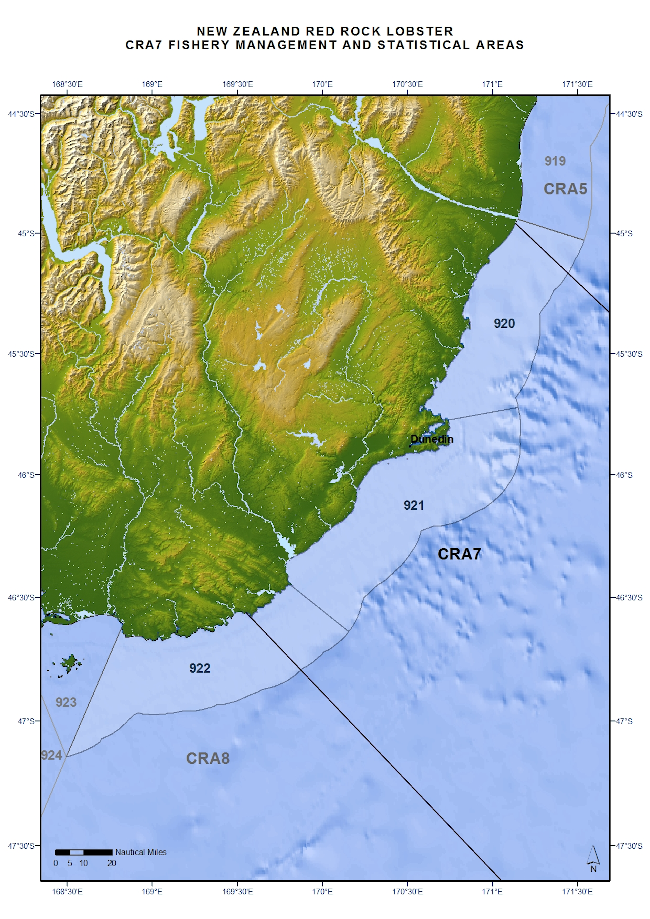 The CRA7 total allowable catch (TAC) is currently 126.2 tonnes. A total of 10 tonnes is provided for customary catch, 5 tonnes is set aside for amateur catch and 5 tonnes for illegal unreported removals. The total allowable commercial catch (TACC) is set at 106.2 tonnes. CRA7 quota shares trade infrequently but a recent valuation was $1,070,000/tonne equivalent. There are 27 quota share owners.

There are 9 CRA annual catch entitlement (ACE) owners and ACE trades at an average of $50/kg. There were 11 commercial vessels reporting in the 2019/20 fishing year. The landed value of the 2019/20 season catch is estimated at $8.3 million (based on average port price paid to fishermen). The CRA7 catch is processed and exported, or sold to the domestic market, by several Southland, Otago and Christchurch companies.

The CRA7 commercial season runs with a differential minimum legal size (MLS) which is a tail length of 127 mm for both male and female lobsters. The fishery is open to amateur fishing with a MLS regime of 54 mm tail width for males and 60 mm tail width for females.