Prior to the introduction of the Quota Management System (QMS) in 1986, New Zealand generally had too many fishing boats chasing too few fish. Many fish species were declining below sustainable levels.

The QMS is now regarded as a model for other countries to help manage their own fisheries in a sustainable way.

At the heart of the QMS is the underlying principle that by assigning a property right (a share of the commercial harvest of a fish stock that a quota share owner can catch in perpetuity), quota share owners have a vested interest in sustaining the fish resource.

For management purposes, each fish species in the QMS is divided into a number of fish stocks. Each stock has a total allowable catch (TAC) which is set to enable the fish population to produce the maximum sustainable yield. This is the level where a fish stock is deemed to be most productive, and is generally between 30% – 59% of its unfished size. The rationale is that a decrease in fish population reduces competition for food, providing a younger and faster-growing population that can regenerate itself at a faster rate.

In this way the long-term interests of quota owners are aligned with statutory requirements to maintain fish stocks at sustainable levels.

How it works in practice

Each year, the Minister responsible for fisheries reviews the TACs, based on both scientific measurement and fishers’ catch data. The TAC for a stock can be adjusted up or down if necessary. The Minister also sets a total allowable commercial catch (TACC) and makes allowances for non-commercial fishing.

Together, the TACC and allowances limit the harvesting of fish stocks to sustainable levels, aiming to ensure that enough fish remain to breed future populations. Although the Minister makes the decisions, commercial, customary and recreational fishers and environmental groups are active participants in the process.

Individual transferrable quota (ITQ) entitles its holder to a share of the TACC for a fish stock.

For example, if someone owns 4% of the ITQ for a particular fish stock, they have the right to harvest 4% of the TACC for that stock. A reporting and monitoring process ensures that landed catches are matched against catching rights.

ITQs are a form of property and can be bought and sold, but only by New Zealanders or New Zealand-owned companies.

New Zealand’s fisheries management regime and QMS is generally regarded as a broad success on the international stage.

The country has mostly avoided fish stock collapses that have plagued other jurisdictions. Around the world, New Zealand has achieved recognition for protecting the long-term sustainability of its fisheries and securing a future for its fishing industry.

The QMS has engendered a responsible attitude in the fishing industry and has encouraged collaborative industry initiatives to improve the status of fisheries and marine environment.

The New Zealand Rock Lobster Industry Council (NZ RLIC) is the national umbrella body for the nine commercial stakeholder organisations operating in each of the rock lobster management areas of country.

Through research and development, the NZ RLIC leads in managing the valuable resource. The QMS has been in existence since 1986; rock lobster fisheries were introduced in April 1990 and since that time the abundance of rock lobsters in our coastal waters has grown significantly, as shown in the graph below. 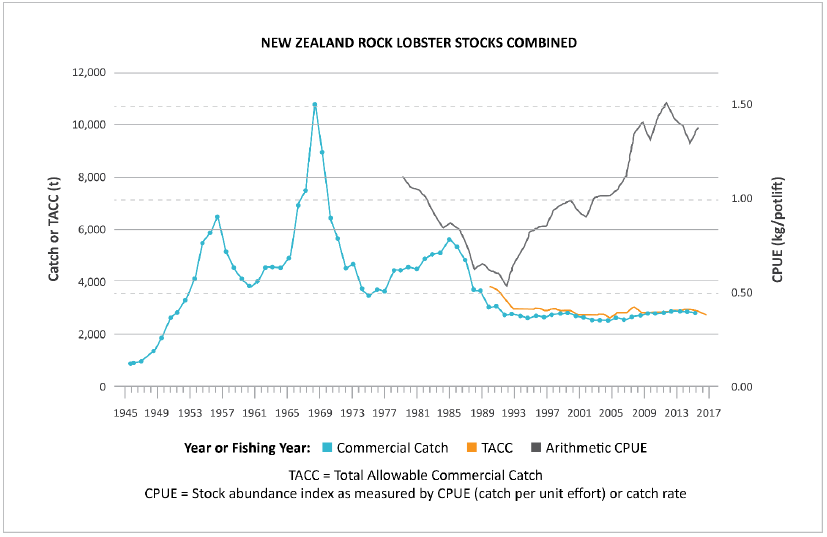 Rock lobsters are the most valuable of New Zealand’s inshore fisheries species, earning $304 million a year in export receipts. It is an important contributor to the health of many of New Zealand’s coastal settlements – providing an economic and social payback for a well-managed resource.

The NZ RLIC statement of intent has been instrumental in protecting and enhancing the rock lobster resource for the benefit of all New Zealanders.