The spiny rock lobster (Jasus edwardsii; koura) has always been important to Maori and for much of this century has supported increasingly important commercial and amateur fisheries.  Rock lobsters support one of the country’s oldest commercial fisheries, and are one of the seafood industry’s top export earners.

The commercial fishery has developed through a number of phases as catches have increased in response to export market opportunities.  Management of the resource has changed in response to the changing status of the stocks and the expectations of stakeholder groups.

Since 1990 the rock lobster fishery has been managed within the Quota Management System and governed by a mix of output controls and fishery regulations, including the provision of a minimum legal size, a prohibition against taking berried females and soft-shelled animals, method restrictions, and the requirement that all pots be fitted with escape gaps.

The current management of the rock lobster fishery is focused on moving stocks to agreed biological reference points and maintaining them at this level or above, primarily through the adjustment of total allowable catches (TACs).

Lobsters are strictly marine. They all have the same basic body plan, being head, tail, 2 pairs of antennae, no less than 6 pairs of mouthpart appendages and 5 pairs of legs.

‘Crayfish’ or ‘Cray’ are strictly freshwater and are clawed, i.e., New Zealand’s Koura.

Unfortunately ‘Cray’ is a common term used for New Zealand’s marine lobsters. Koura is the general Maori name for both (freshwater) crayfish and (marine) lobsters.

New Zealand has four species of rock lobsters (spiny lobsters), the most common of which is the red rock lobster (Jasus edwardsii). In Australia this species is known as the southern rock lobster.

Other species found in New Zealand are:

The red rock lobster is dark red and orange above, paler and yellowish below. The body is spiny, especially on the head. They can weigh up to 8 kg and reach lengths of about 60 cm (excluding the feelers). 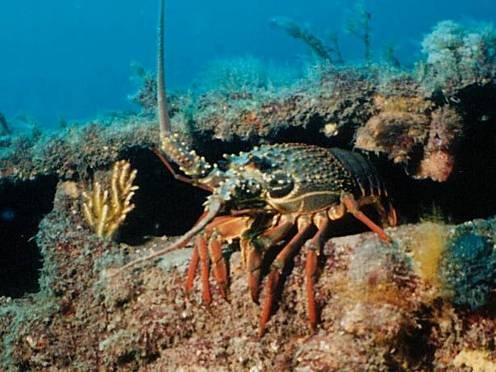 In contrast the packhorse lobster is green. Its carapace (the protective shell of the head and thorax) has a distinctive shape at the front part and distinctive patterns of spines. The packhorse also has a lack of sculpting on its tail.

As the world’s largest rock lobster it has been found to weigh up to 20 kg and reach lengths of 70 cm.

The deepwater rock lobster has a distinctive apricot colour, two prominent rows of spines on its carapace and a central ridge along the top of its tail. It is a much smaller rock lobster reaching lengths of 25 cm.

The tropical rock lobster species is a medium sized species of the Western Pacific. They have a distinctive structure at the base of each feeler that produces a sharp, rasping sound when the feelers move.

Very small lobsters usually shelter alone in small cracks or holes. As they grow they become more gregarious and can be found in groups of 50 or more. This behaviour helps to protect them from predators. Once they become sexually mature their willingness to share dens varies seasonally especially for males.

During the day red rock lobsters are normally found in rock crevices (dens), which provide shelter from predators, storms, and the sun. They generally leave the dens around dusk to forage for prey, returning just before dawn.

The deepwater rock lobster is a very deepwater lobster, found between 500 m and at least 900 m. Our knowledge of its deep rocky habitats is very limited.

Packhorse rock lobsters are widely distributed, as far north as the Kermadec Islands, south to Foveaux Strait, and east to the Chatham Islands. They are fished mainly in the far north of NZ. (They also occur in eastern Australia – northern Victoria and New South Wales – where they are commonly called the eastern rock lobster).

The deepwater rock lobster is widespread in the southern oceans. The species is most commonly found in the Bay of Plenty, off the Wairarapa coast and across the Chatham Rise.